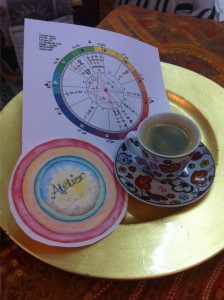 I always had that feeling that I couldn’t go the usual route of working towards a pension at some later point in time. It was no doubt influenced by the loss of loved ones quite young and helped along by being in close to the mortgage industry working in the estate agent world. So much hope and promise on getting rich quick schemes that often we signed up for future deals that could never be, because they were geared around making companies and their salespeople wealthy and to hell with the client! I am eternally grateful for having my eyes opened to the futility of striving for something that was not even on my karmic road map.

To be honest I thought I might actually die around age 42. My stepmother died at that age, killed in a car accident, her youngest son was 19 at the time. When my own mother died of cancer my young brother was 19. Before I left Scotland two women, both customers from my astrology shop who later became good friends both died age 42, one alone in her car in a diabetic coma, one after a battle with cancer. When I was 42 my youngest son was 19. Too many coincidences for my liking!

As it happened though, at age 41 I entered a monastery. Just as a volunteer, and I had to leave every evening before sundown and come back in the morning after sun up. I often wondered why of ‘all the bars in all the town’ so to speak I walked into a male monastery and for the most part couldn’t be included in what was going on there?

It did occur to me that I was in some kind of safe ground though, protected from some karmic wave that might have knocked me into a scary place. I shared my fears with one of the monks there, he offered up the idea that maybe I was lucky to be having some kind of new life that I could dedicate to dharma practice. If only I knew what that was!!!

All I knew was that there was no turning back and no clue about what the future might hold.